Trulia Ranks Charleston As The No. 2 ‘Hot Real Estate Markets To Watch’ in 2016

Trulia Ranks Charleston As The No. 2 ‘Hot Real Estate Markets To Watch’ in 2016

“The Charleston, S.C., real estate market is hot (and we’re not talking about the summertime temps!) — no doubt in part due to its ranking as the sixth-highest for job growth in the U.S.,” list compiler and Trulia chief economist Ralph McLaughlin said in his review.

Job creation in Charleston and the promise of warmer climate for retirees are driving demand in our area.

Thinking of retiring in Charleston, SC? Get a FREE relocation package mailed to you.

“There are lots of reasons why so many people love the Lowcountry. Charleston is a serious foodie destination, with 11 restaurants earning nominations for coveted James Beard Awards in 2015 alone, and the popular Charleston Wine + Food Festival, which will celebrate its 10th anniversary in 2016.”

McLaughlin examined each city for affordability and strong job growth, plus other factors, including vacancy rates.

In broader terms, South Carolina is also outpacing the U.S. in leading economic indices. This graph by the Federal Reserve tells the story... 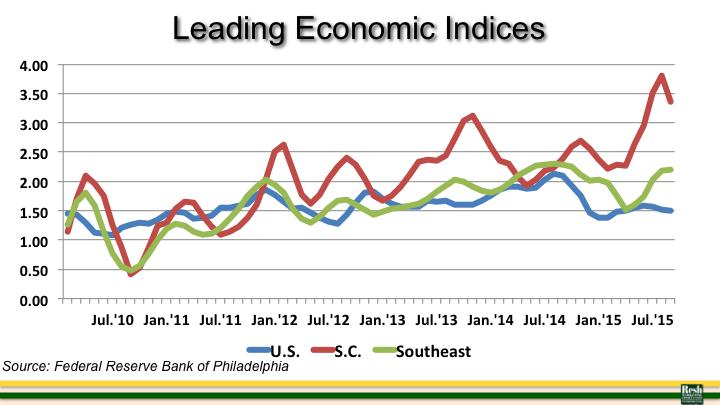 Tags: charleston area real estate, south carolina, market trends
Comments have been closed for this post.
Please contact us if you have any questions or comments.
For Buyers
For Sellers