Real Estate Market Update: Are We in a Bubble?

There are some industry pundits claiming that residential home values have risen too quickly and that current levels are on the verge of another housing bubble. It is easy to see how this thinking has taken form if we look at a graph of home prices from 2000 to today. 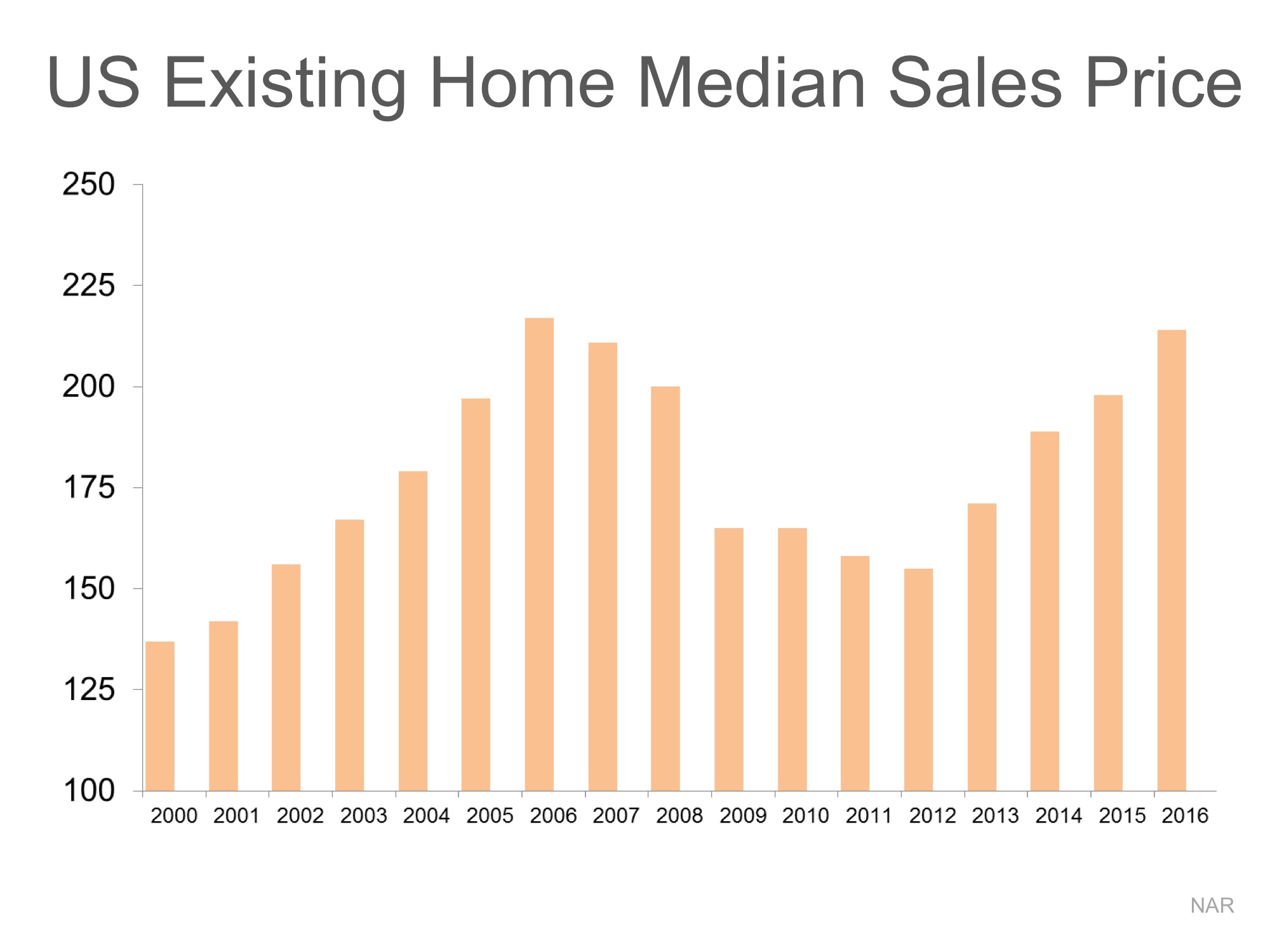 The graph definitely looks like a rollercoaster ride. And, as prices begin to reach 2006 levels again, it "seems logical" that the next part of the ride would be downhill. However, this graph includes the anomaly of the price bubble and the correction (the housing crash).

What if the bubble & bust had not happened?

Let's assume that instead of the rise and fall in home prices that we saw last decade, we just had normal historic appreciation from 2000 to today. According to the 100+ experts that are surveyed for the Home Price Expectation Survey, normal annual appreciation for residential single family homes from 1987 to 1999 was 3.6%.

Starting with the median home price in 2000, we added 3.6% to it each year since then. Here is that graph intermixed with the above graph. 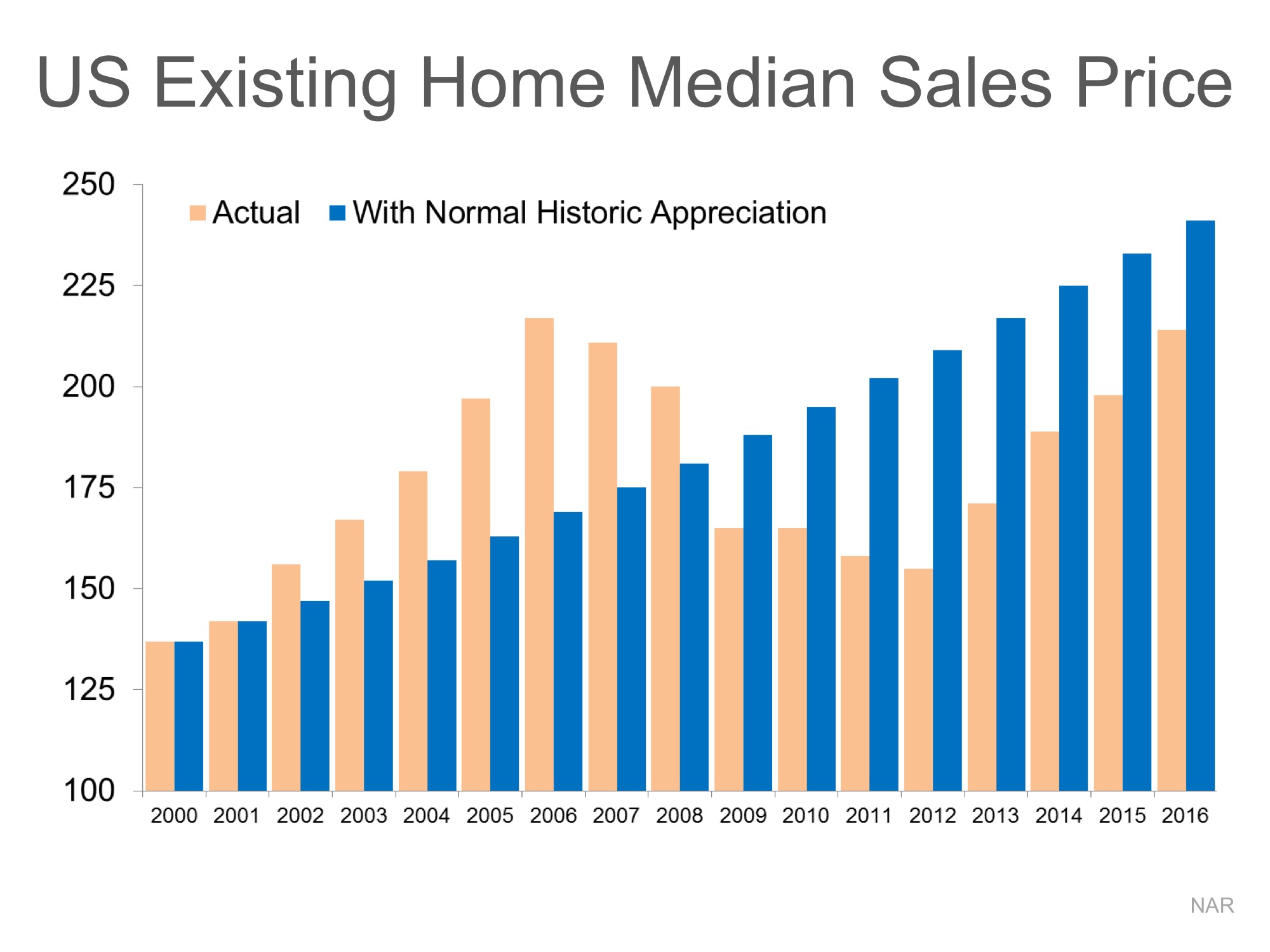 What this shows us is that, had the bubble and crash not occurred and instead we just had normal annual appreciation over this period, prices would actually be greater than they are today.

There is no reason for alarm as prices seem to be right in line with where they should be.

We just got voted #1 City in the World by Travel and Leisure Magazine, for the 2nd time!! Great news about job creation in Charleston include Boeing, Volvo, Mercedes Benz, Silicon Harbor, growing colleges, a booming health sector, the Port of Charleston now getting post-Panamax freighters, shopping, new restaurants, etc.

You really need to check out Lewis BBQ downtown on Nassau St. and see what’s happening to that section of town. Amazing!!

All of these developments and kudos are making lots of people want to move here, and our real estate market is doing quite well. 2016 will probably be the 2nd busiest year ever in Charleston's history, as we will probably register over 16,000 residential transactions. (we’re up 8.1% in terms of number of transactions year to date over 2015).

Many people ask us if this is going to be another bubble like in 2006-07. We don’t believe so, for two reasons:

One, credit is much tighter now, as lenders have a much more controlled loan process these days, and that’s a good thing. And two, demand is being driven more by job creation and baby boomers retiring than by speculation, which was one of the main drivers in 2006-07. Home prices are not out of control when they’re only going up 4-5% each year, compared to the national average of 3.6%. So things seem quite sustainable.

We have noticed a "softening" at the top of the market in Mount Pleasant (see graph - data gathered from Showingtime Reports). And Mount Pleasant normally leads the rest of the Charleston area in real estate trends. Showing activity is down year-over-year for July and August in most price points, especially in the luxury market. With exception of the $650K to $850K range, which may indicate a trend of local buyers upsizing or  upgrading their homes while interest rates are low.

Keller Williams' founder Gary Keller predicts that there will be a market shift in the U.S. in the next 12 months. We don't know if this "price fractured" market in Mount Pleasant is a temporary aberration, or if it's signaling a market shift. Inventory is still pretty low... it could be just "election jitters".

Unfortunately, this is just speculation, as we WON'T KNOW for sure that we have turned the corner until AFTER we have shifted, when inventory has started to increase rapidly. Real estate markets are cyclical, and the cycle is normally between 7 and 10 years. Mount Pleasant prices have been appreciating for over 3 years now. So it could be time for a "normal" slowdown. Buyers will certainly appreciate a little breather from multiple offer situations.

For now, keep a watchful eye out...other "luxury" markets like Aspen, Miami and the Hamptons are already experiencing a downturn, but we believe Charleston has stronger fundamentals...so even if we get a market correction, we don't think it is going to be as severe or as long as the last one.